Skip to content
Samson was the judge of Israel for 20 years. He is a not-so-popular subject of Sunday sermons where he is often torn down for languishing in the lap of Delilah and sharing the secret of his strength. If he was such a victim of his lust and appetite for Philistine women, why did the writer of the book of Hebrews place him in what has been called the “Faith Hall of Fame”  where the heroes of the old testament are lauded for their exploits [Hebrews chapter 11]? I believe that although he had some lapses in judgement that appear to be largely due to youth and hormones, his purpose was tellingly shared in Judges 14:4:
4 His father and mother didn’t know that the Lord was behind this. The Lord was looking for an opportunity to do something to the Philistines. (At that time the Philistines were ruling Israel.)  GOD’S WORD translation

So what was his story really about? The book of Judges describes the judges (actually rulers) of Israel for the following period:  1350 – 1004 B.C.

During this time Israel fell into periods of disinterest with God/idolatry and as a result God would allow them to be victimized or enslaved by their enemies. When they recognized their plight they would cry out to the Lord for help and He sent judges to deliver them from the enemy. Samson was one of these judges. 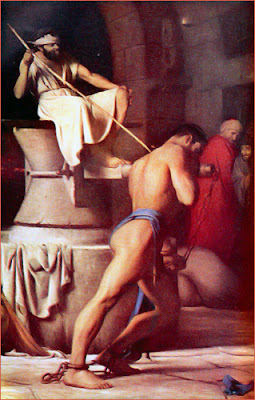 What are we to learn from all of this?  Our blessing remains in place only as long as we remain true to our purpose.  As the nation would turn from God and suffer as a result, our lives will suffer the same consequence.  Note carefully that our faithful God always sent help (in the form of judges) even though this continued for more than 300 years!
What did he actually accomplish?  Samson, a Nazirite from birth was foretold to be the deliverer for the people.  He had a considerable swagger as a man of destiny.  He made himself the main target for Philistine animosity by burning Philistine fields and taking up with Philistine women.  Chapter 15 tells of the aftermath of one of his rampages where he chose to escape to a cliff rather than endanger his community.  The men of Judah came to capture him but when he was about to encounter the Philistines, the Spirit of God came upon him and he [famously] used the jawbone of an ass to slaughter 1000 Philistines.
Doubtless, most people familiar with Bible lore remember the rest of the story of his betrayal by the infamous Delilah.  Her name is synonymous with being a temptress and betrayal.  The story climaxes as he is led blind and helpless to entertain a palace full of Philistines.  He asks God for one last infusion of strength to avenge himself for his two eyes.  He asked to die with them hence giving his life to rid Israel of their most plaguing enemy.
He could not have known that the palace would be full of the most powerful and influential Philistines.  Look at the faith he exhibited, he only asked to avenge himself for his loss of eyesight but by God’s grace he gave his life and destroyed thousands of Philistines in one place.  So many gloating over Samson’s shortcomings but which of us have sacrificed our lives (literally) to deliver people from oppression?
How are we to be guided by this example?
Have faith in the purpose God has placed in you and in the fact that God will help you in achieving that purpose.
grace & peace!!