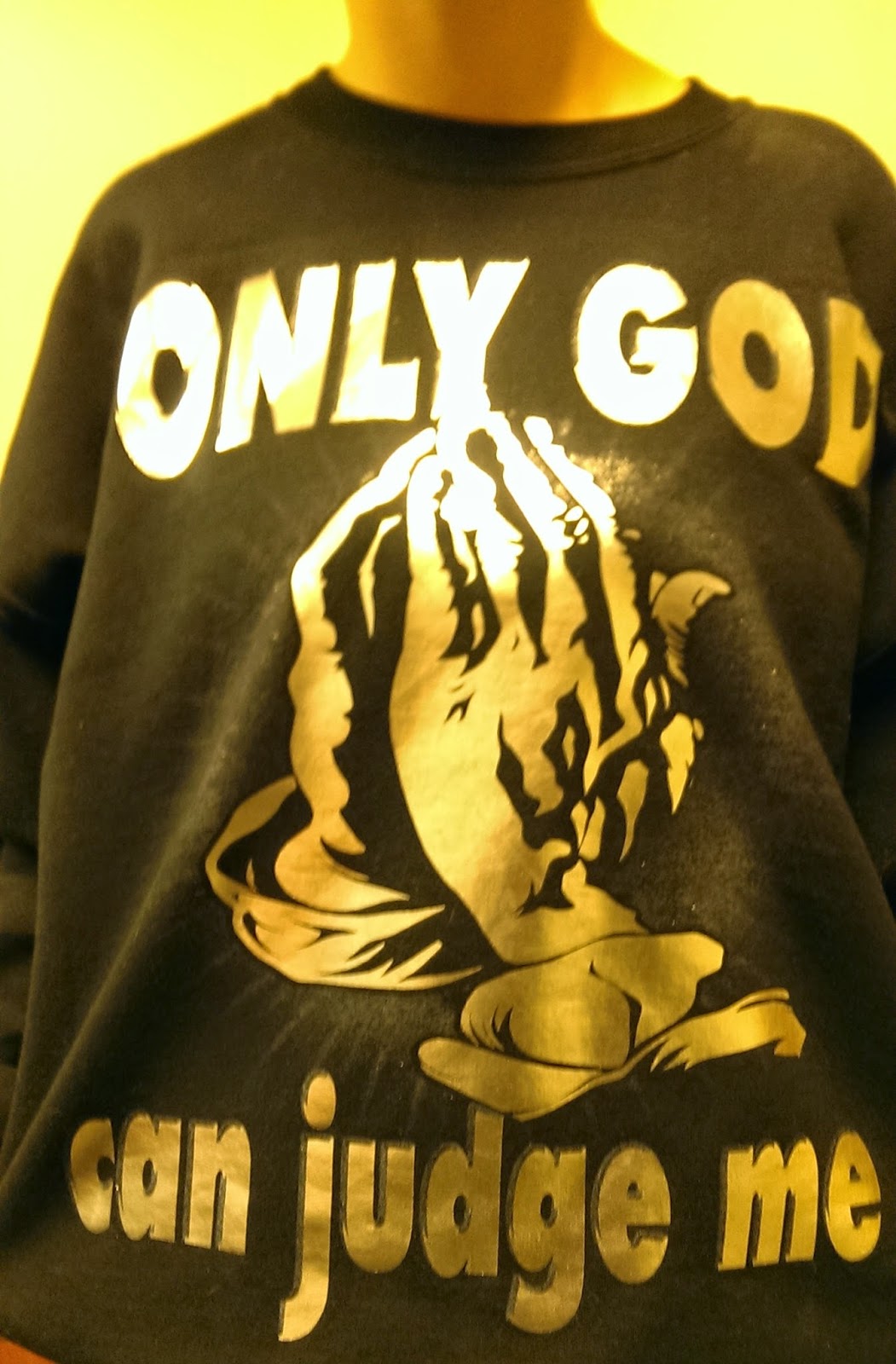 I stopped a young lady friend wearing an increasingly popular shirt so that I could take the photo to the left.
What does the Bible say about judgment anyway?
John 3:18Amplified Bible (AMP)
18 He who believes in Him [who clings to, trusts in, relies on Him] is not judged [he who trusts in Him never comes up for judgment; for him there is no rejection, no condemnation—he incurs no damnation]; but he who does not believe (cleave to, rely on, trust in Him) is judged already [he has already been convicted and has already received his sentence] because he has not believed in and trusted in the name of the only begotten Son of God. [He is condemned for refusing to let his trust rest in Christ’s name.]
Part of the ambiguity over this matter has to do with context, a significant problem for those generally unfamiliar with bible study.  The context in question goes to who is doing the judging and whom is being judged.
To be sure, those who are not believers in Jesus Christ [those who rely upon, not just assent to his existence] have already been judged and are found to be guilty as charged.  The great news for them is that Christ has already paid the cost for their sin and guilt if they can accept his sacrifice.
Now for all who count themselves as part of the household of faith, an admonition not to judge other believers is found in Matthew 7 and again in Luke 6:
“Judge not, that ye be not judged. For with what judgment ye judge, ye shall be judged: and with what measure ye mete, it shall be measured to you again. And why beholdest thou the mote that is in thy brother’s eye, but considerest not the beam that is in thine own eye? …” (KJV  emphasis added)
. . . hence the confusion as reflected in the shirt.  Without clarification to determine where judgment is applicable, it’s possible to assume that I cannot be judged.  But if I am a believer, the following passage describes the judgment and scrutiny my life is under:
31 For if we searchingly examined ourselves [detecting our shortcomings and recognizing our own condition], we should not be judged and penalty decreed [by the divine judgment].
32 But when we [fall short and] are judged by the Lord, we are disciplined and chastened, so that we may not [finally] be condemned [to eternal punishment along] with the world. I Corinthians 10:31-32 [AMP]

Fortunately, the assumption that I cannot be judged is incorrect. I judge myself and if I fail, as a son I will receive chastisement from the Lord.  Not dire, cruel punishment but discipline that will help me be a better servant and son.  We learn the role and importance of Kingdom discipline and judgment.  Not only will believers serve as judges, their judgment will serve as a vital force in the Kingdom to come, as written:

2 Do you not know that the saints (the believers) will [one day] judge and govern the world? And if the world [itself] is to be judged and ruled by you, are you unworthy and incompetent to try [such petty matters] of the smallest courts of justice?
3 Do you not know also that we [Christians] are to judge the [very] angels and pronounce opinion between right and wrong [for them]? How much more then [as to] matters pertaining to this world and of this life only!
I Corinthians 6:2-3  [AMP]
At first blush, the shirt sounded like a credible theological point but upon reflection we find that the slogan like so many things that seem spiritual, is merely religious.  That is, it is self-serving and it brings people to assume that their thoughts are in accord with what God wants. God has given us his word and if we would study carefully and apply the truth therein, we will fulfill our genuine purpose.

The natural man cannot understand spiritual things.  [1 Cor 2:14]  It is that simple.  Natural men, philosophers, and those supposed harbingers of knowledge have decided that unless metaphysical matters of the universe can be explained through some reasonable and well-thought out process, then they are not feasible.

How can people be so self serving that they think the mysteries of the universe are openly available for their consumption. That they ought to be able to understand and comprehend the very rationale that governs how and why the universe is the way it appears.  The Bible says: “The message of the cross is foolish to those who are headed for destruction! But we who are being saved know it is the very power of God. As the Scriptures say, “I will destroy the wisdom of the wise and discard the intelligence of the intelligent [Isa 29:14]. So where does this leave the philosophers, the  scholars, and the world’s brilliant debaters? God has made the wisdom of this world look foolish. ”

Proverbs 25:2 says: “It is God’s privilege to conceal things and the king’s privilege to discover them.”  God has concealed and left to mystery the things He has chosen and left  for the Kings [inheritors of the Kingdom] the privilege of discovering the mysteries.  We live by faith and not by sight  [or even understanding]. Hab 2:4 and several NT references

Even the things we know, we fail to get right.  We love others but still offend or hurt them.  We judge or rule but our decisions fall short.  We do our best but our best is not good enough.  We often don’t know what we don’t know.  So when Jesus prayed “Father forgive them for they know not what they do” it was not just a request for his crucifixion, but for all of our assumptions that fail.  Even in His agony, surrounded by those whom He had loved for years, there was no escaping their shortcomings in the face of the religious and political opposition.

Alas it is the foolishness of preaching that brings men from darkness into the light.  Share your faith and light as you wait for God’s grace . . .