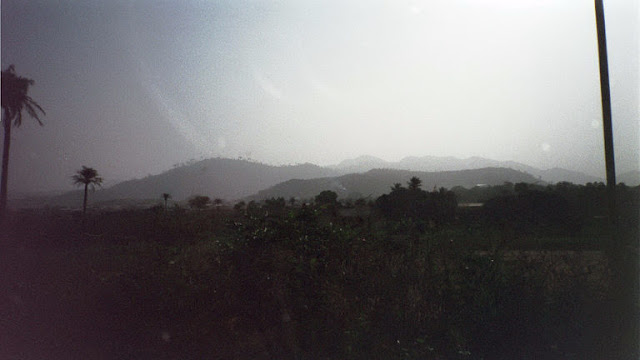 Throw back selection
I wrote this entry in 2003 as I returned from my first mission trip to Sierra Leone. We were compelled to pursue this trip due to the spillover of combat from Liberia and continued excalation of Rebel troops in country. Toward the end of the uprising, British troops were sent to quell the movement. Our task was to provide counseling training to pastors and teachers who could in turn, support parishioners traumatized by the perils of conflict. God was with us as we worked and toured the wartorn areas afterwards. 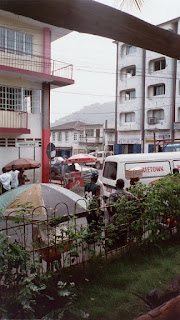 The look, the smells, the humidity of Abidjan evoked mental images that seemed planted in my mind from long, long ago. The possibilities and untapped potential of this vast continent still bewitch me. These things accompany the oddities and irony of having so little in a world of so much. I was accosted in customs twice, not for security reasons, as we in “post-September 11” terms would believe. I was hit up for a bribe. In countries where the tax structure is loose, often the possibility of getting a paycheck is even looser. This becomes standard procedure, otherwise they probably wouldn’t get paid for months.
My friends thought it enviable to visit a tropical climate in February. What they failed to realize is that the heat is great as long as you can find some relief. Without ice cubes, air conditioning or a ready swimming pool to dive in, the heat becomes an unrelenting annoyance. We, as Americans are very, very spoiled.

I am weary of the American press. There doesn’t seem to be interest in publishing items that don’t affect us or our money. Some disaster or disturbance that affects thousands of people of color across the world is not nearly important enough to interrupt the top story: “The Dow Jones industrial average lost 15 points today in moderate trading”. Some brief references to Kofi Annan holding a war crimes tribunal was the most that I knew for some time about the immediate crisis in Sierra Leone.
The war crimes tribunals were being held due to the terrorist atrocities committed by the Revolutionary United Front (RUF) fighters reportedly entering Sierra Leone from Liberia. The RUF intimidation tactics included limb amputation, rape and other atrocities that did not exclude women and children. We were able to visit the amputee camps built and funded by collaborative charities including the UN, Scandinavian and sectarian groups. These camps were for the most destitute and their families.
One of my most poignant memories was of the man who greeted us and talked about the camp. He talked about the craziness of the rebels and how many amputee victims were still outside the camps. I felt most helpless hearing his rendering of how he struggled to feed his family of five children. Before the war he worked as a truck driver; the rebels amputated both his arms.
I really don’t have any problems.
It was later when I found out about conflict diamonds and the recommendations of the United Nations panel imploring countries to create a diamond identification system that would discourage the trading of diamonds. Conflict diamonds are those mined in countries where aggressors forcibly enter a country and compel inhabitants to be laborers. The diamonds are then used as currency for buying food and sometimes weapons.
We worked with pastors and clergy from around the country. We taught counseling, active listening and conflict resolution to pastors in hopes that they could use those skills and be of service to their parishioners. We provided therapy for them to begin to alleviate the trauma they had experienced.
Many of the stories they told were sad, painful even, but the stories from Bo and Kenema were startling. Stories of looting, burning and public executions gave me pause. I was already intimidated coming to the country a little more than a week after the peace treaty was signed. The more we moved around, the more I felt the presence of the UN peacekeeping forces; I grew reasonably comfortable.
We took an opportunity to travel to Makeni with a woman pastor who fled her home months ago. The trip took hours in a modern United Methodist truck. The fact that the church symbol was emblazoned on the door gave us access to areas and more freedom than we may have had. We stopped and prayed by the side of the road when we first left Freetown, the first indication that this was no mere joyride.
One of my companions had been a missionary in Makeni and when she attempted to photograph her house, the police questioned her. It seemed that her house was now a police barracks. We talked with the chief of police for the town and told him of our visit and purpose. He provided us with an officer to escort us as we visited. We saw one man, being held and questioned who was rumored to be a rebel.
This is a smaller rural town. It clearly had a different feel than the bustling Freetown. It also had a perceptible sadness that reminded me of the days just after September 11. Nothing said, just the expression on people’s faces, how they carried themselves. They had experienced some pain, it was in the air.
One of the last days we were in country, we heard President Ahmad Tejan Kabbah speak of the trauma all Sierra Leonians had experienced. He expressed his desire to continue the healing of the country. I was grateful that the news of his re-election was broadcast nationally.
Upon leaving the country everyone is interviewed by the country’s mining service. This is an attempt to control the smuggling of diamonds out of the country. It may be effective in some ways, but the need expressed by the UN special panel to create a system that certifies diamonds and their place of origin needs to be put in place. 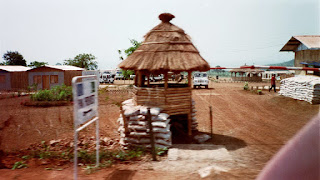 We saw the bauxite mining and heard about the travail of diamond mining. Raw diamonds have limited value in their raw state and it is not until they are cut and shined that they are re-valued. The dark-hued men, women and children who do the backbreaking labor to surface the gems get precious little for their labor. Yet, we are those who sport the “bling-bling” further exploiting our brothers and sisters simply to help us look cute. To quote Eldridge Cleaver: “What we’re saying today is that you’re either part of the solution or you’re part of the problem”