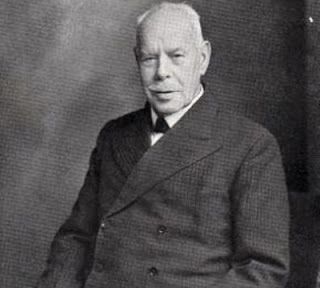 Smith Wigglesworth was a British plumber who reached the world as an evangelist.  His ministry spanned several continents and touched thousands.  He was able to minister in the U.S., New Zealand,  South Africa, India, Ceylon and several European countries.  His blessing to the body of Christ was his healing ministry.  He was illiterate until adulthood.  His wife taught him how to read and he began preaching when he received the filling of the Holy Spirit.

He was an unabashed Pentecostal/Charismatic and shared the importance of the gifts of the Spirit. Many miraculous deeds occurred including his own healing and description of how Christ made him whole.  He was often quoted as one who knew much about the walk of faith.

I bring an excerpt from his book: On Spirit-Filled Living entitled Dare to Believe God:
“Faith is the substance of things hoped for”(Heb 11:1) right here is this life.  It is here that God wants to share in His divine nature.  It is nothing less than the life of the Lord Himself imparted and flowing into our whole beings  . .  When the woman who had suffered for twelve years from a flow of blood was healed, Jesus perceived that power had gone out of Him (Mark 5:25 – 34).  The woman’s faith reached out, and and His power was imparted.  Immediately, the woman’s being was charged with life, and her weakness departed.  The conveying of this power produces everything you need, but it comes only as your faith reaches out to accept it.  Faith is the victory.  If you can believe, the healing power is yours.

I suffered many years from hemorrhoids, until my whole body was thoroughly weak; the blood used to gush from me.  One day I got desperate and took a bottle of oil to anoint myself.  I said to the Lord, “Do what you want to, quickly.”  I was healed at that very moment.