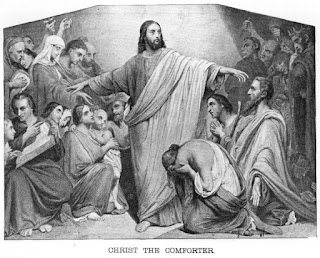 Every leader will be challenged, especially when trying to lead “stiff-necked, hard-hearted people, which  from time to time, we ALL are.  Jesus faced the same issue as he tried to lead people into the Kingdom.
For many of us who assume the mantle of leadership, there is a particular danger of succumbing to unbelief.   Without question, leaders can find themselves questioning their steps and their strategy.  Leaders can be plagued by self-doubt.  The narrative of such can be: “Am I sure that this is way to go?  Is this the direction we should pursue?  Did I miss God?”
Considering this, we know that Jesus was the only begotten of the Father, that is, the only offspring to inherit the fullness of the Godhead in one person.  He was fully God and fully man.  I do not pretend to understand how the Trinity works and I fully doubt that any man does.  God gave him the Spirit without measure [John 3:34].  We also know that he “ . . . was in all points tempted like as we are, yet without sin. [Heb. 4:15] so he was tempted to experience the self-doubt that we experience but he did not fall prey to it.
In the sixth chapter of John’s gospel, Jesus responded to a demand that he show a sign that he was God’s messenger.   He responded by telling the crowd that he had come down from heaven.  Many were offended because they thought they already knew him.  They said, “isn’t this the son of Joseph? Don’t we know his mother?”  They argued earlier in the passage that Moses had given the people proof that he was sent from God . . . “Show us what you can do, Moses fed our ancestors bread in the desert.”  [MSG]
Jesus said ”  I am the Living Bread that came down out of heaven. If anyone eats of this Bread [believes in Me, accepts Me as Savior], he will live forever. And the Bread that I will give for the life of the world is My flesh (body).” [AMP]
This statement was a full affront to his crowd of followers.  The statement meant that anyone who fully commits to me will be alive forever.  They commented to him that it was a very hard statement assuming that he literally meant that they would eat his flesh.
At this point, many left the site and the ministry, offended that he would ask that of them.  Jesus was regarded as teacher, he called himself a prophet but many hoped that he was the “chosen” revolutionary who would lead Israel out of Roman oppression.  The disciples had some knowledge of who Jesus was but it seemed fleeting.  They too struggled hearing him preach the Kingdom but not understanding how it would come to pass.  Obviously, they assumed a literal, physical Kingdom.
So when Jesus saw the departure of the other disciples, I am sure that gave him pause. There was a good number of followers who were offended and left.  He then looked at the twelve and asked “Will you leave also?”
His statement to the crowd was that he was the Bread of Life to be consumed by those who were absolutely committed to him.  His question to the disciples was questioning how offended they were, their conviction and their commitment.  His humanity may have led him to believe that the disciples would leave.
He declared to the Father in Gethsemane that he didn’t lose any of the followers given him, but he may have been tempted to give up, to throw in the towel, to question himself.  He had to endure the uncertainty, loneliness, and the burden of leadership.  So do we.