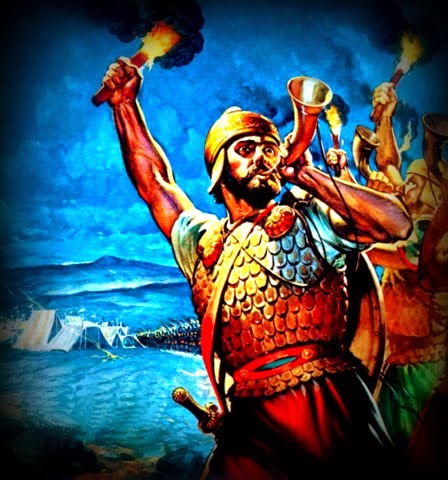 Gideon, a well known member of the Faith Hall of Fame [Heb. 11:32] was called to be another Old Testament judge.  He started out as many of us do, without a shred of courage. He was called by God to be a mighty warrior; received his purpose in person [Jud. 6:12].  He was given a mandate by Almighty God to save Israel from the Midianites with the explicit notice that God was with him to accomplish the mission.  He was not convinced.   God was patient and suffered-long with him to verify that he was sending him.
God fulfilled the three tests Gideon gave him to prove that he was to battle these enemies.  The term “fleecing the Lord” came from the tests that Gideon requested.  These tests were actually dangerous in that they tempted the Lord and in effect attempted to coerce action from him. Thanks be to God who is merciful, longsuffering, and does not requite evil for evil.   Gideon learned to trust God over time and then did defeat the Midianites learning to believe in what God was telling him and follow His lead.
Now, in that same manner, I have been called to make war [I Tim 6:12, Eph 6:12] and told through the Word of God to save the lost from certain death.  As I have been told all these things, I am still unconvinced that I can do what I have been told.  The bible says that ” . . . His divine power has given to us all things that pertain to life and godliness [II Pet. 1:3 NKJV]. And that we should “Love your neighbor as yourself.’ but in order to reap the full benefit of what has been prepared we must believe what we have been told and act courageously to complete the mission.
I am to fulfill my purpose which will include making peace, reconciling God with men and loving the un-lovable.  This requires me to dis-avow traditional ties I have with friends, family and loved ones who are alien to the Kingdom.   This requires also courage and boldness.  This cannot be done in my own ability, I need help.  I need comfort and reassurance of God’s presence and ability.  I need a regular re-infusion of divine ability to succeed in my mission and purpose.  The spirit of God fell upon Gideon and he was still unconvinced that God would help him.  It was God’s simple and ongoing reassurances that allowed him to persevere.
So under Gideon’s reign as judge over Israel the occupying hoard of Midianites were banished and 150,000 warriors died under the sword.  Gideon could not have imagined his victory when he was working as a hired hand on a farm. I can not imagine the success before me either.  For I am Gideon.