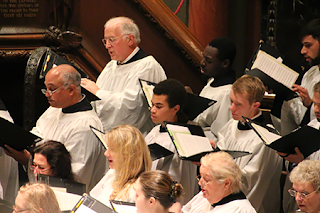 The writer of their article published by the Daily Beast unknowingly got it half right for reasons the writer couldn’t have known.  In order to sell magazines and papers the American press has leaned in the direction of sensationalism.  An article reporting on the decline in church attendance in America is not news. An editor seeking to catch reader’s attention adds a partisan slant to the headline.
http://www.thedailybeast.com/articles/2015/12/26/the-religious-right-is-right-to-be-scared-christianity-is-dying-in-america.html
Read the rest of the article to understand the writer’s point of view. These issues are not new but the article did inspire this writer to submit an apologist response based in spiritual reality.
The American church has changed radically over time. Long gone are Aunt Bea and Andy singing in the church choir (e.g. The Andy Griffith Show) .   Small town churches where traditional and cultural ties help bind members into normative behavior and in the best circumstances, worship.   Traditional churches inside cities are closing as second and third generation parishioners move farther into the suburbs.  Congregations that sing four verses of hymns and recite litanies predominately are older and certainly have begun to hemorrhage younger couples and teens.  Most importantly, as it appears [in a purely anecdotal way], the charismatic (spirit-filled) congregations that learn to adapt to a browner America and adhere to a living Word  are flourishing and attracting young families and youth.
The Religious Right, traditionalists and posers  who are in Christ’s words, “whited sepulchers” without sincerity or integrity will not survive the shaking spoken of in Hebrews 12:25-27.  Already we have seen difficulties and losses from those who wouldn’t take persecution.  Who is willing to be hated for the sake of Christ and the Kingdom?
ii
The Religious Church i.e. the churchers who work to propel themselves in an attempt to engender God’s affection is getting smaller and losing momentum. This is a subset of Christ’s church who sincerely believe that they are doing what they are supposed to do while inadvertently slowing or blocking sincere seekers.  These are they who by virtue of tradition and habit find themselves doing church work week after week, month after month but their sense of conscious contact [worship] is missing. Jesus said
[7]  Their worship is a farce,  for they teach man-made ideas as commands from God.’
and again,
[13]  And so you cancel the word of God in order to hand down your own tradition. And this is only one example among many others.”  (Mark 7: 7, 13 NLT)
Religion in its many forms is causing severe damage to civilization by people who have been radicalized or who have convinced themselves that their own thoughts and/or desires have been transmitted from the very throne room of God. In many places authority is in place that keeps error in check, but not everywhere.  Hence radicals, terrorists and zealots have many more people and non-believers cringing in fear and bewilderment.
The actual word wicked comes from the root wicca  from which also comes the word wicker meaning twisted  i.e. not straight (like the truth).  This is the insidious part of any lie, within it is some form of truth but it has been twisted in some way and as a result becomes a stumbling block.  We could discuss abortion, for example.  It is wrong to kill an unborn fetus. Period.  But it is just as wrong [if not worse] to terrorize and threaten innocent bystanders and health workers with destructive weapons and violence. Religious thinking [and in this case wicked thinking] promotes this type of behavior.  Wars, genocide and atrocities have begun this way.
The Bible says: “If it be possible, as much as lieth in you, live peaceably with all men.” (Romans 12:18) That statement alone denounces so many acts of people who consider themselves religious but act with impunity in ways that disgrace and dishonor the god(s) they say they serve.  This should not be.